by stefanv
I've recently become intrigued by the Chord EGG, and have in mind to design a new version not requiring any hard-to-get parts. I've already got the design pretty much fully formed in my head, and half of it down on paper (hint: it still uses only 5 chips like the original, but all 5 will be the same kind of readily available chip). More details when the design is done and the build under way.

Of the four note selection oscillators, one is slightly different (besides the differences in component values to achieve different rates). The one built around IC5C has two resistors in its feedback path, one blocked by a diode. My gut feeling is that this causes the oscillator to have a duty cycle of around 30% instead of 50%, but any idea why this was done?

by stefanv
Just wanted to update everyone (anyone?) on the progress. I've got the basic design completed (schematics only at this point, no layouts), but I'm slightly stuck on the filters.

by stefanv
I happened to have a pair of LM3900 chips, so I decided to breadboard the Chord Egg oscillators to see what their actual periods and duty cycle are. Here's what I found:

EDITED to correct some errors. I'd typed in the wrong set of results.

by stefanv
Time for another update. I've finished a circuit board layout (I'll be using stripboard), and have started making the board. It's 2.7 x 7.7 inches. How does that compare to the original?

My eventual plan after playing with it for a while is to make it into an alarm clock, using the Chord Egg sounds as an alternative to a radio. I'll post the schematic, board layout, and some brief build notes on my web site once I'm done.

Looking forward to your updated version.

by stefanv
Rather than wait until I'm done to write up my notes, I'll do that as I go along, and share the images in this forum. 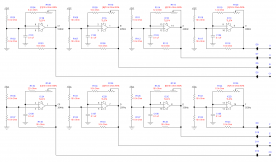 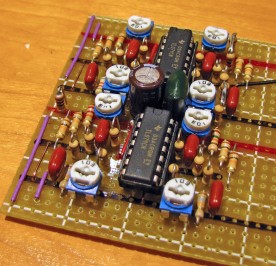 by stefanv
I've completed the four low frequency oscillators that control the note randomizer. Once again, a TL074 quad op-amp is used: 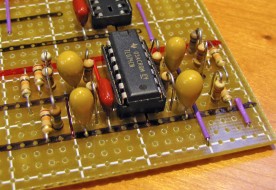 Next up are the chord randomizer oscillators, and the 2-bit to 4-line decoder.
All times are UTC-05:00
Page 1 of 3